After being in an incessant style coma since the 1960s, the world of menswear came alive again around 2008-2009. Five years later, classic suiting has become the darling of the menswear industry. Possibly spawned by mass media featuring more well dressed men in print, television and film, an awareness has been created that has triggered droves of men to experiment with expressing their sartorial selves.

For the men who were already interested in suiting well before it became novel to dress up–these same men may not have predicted which style experimentations the decade of the 2010s would hold.

As we find ourselves mid-decade, we notice that there are two camps of menswear :  classic and progressive.  Trends that have stayed for a while are usually a “merging” of style aspects from both camps, and have yielded some results that either make the teeth clench or that you can’t help but like. 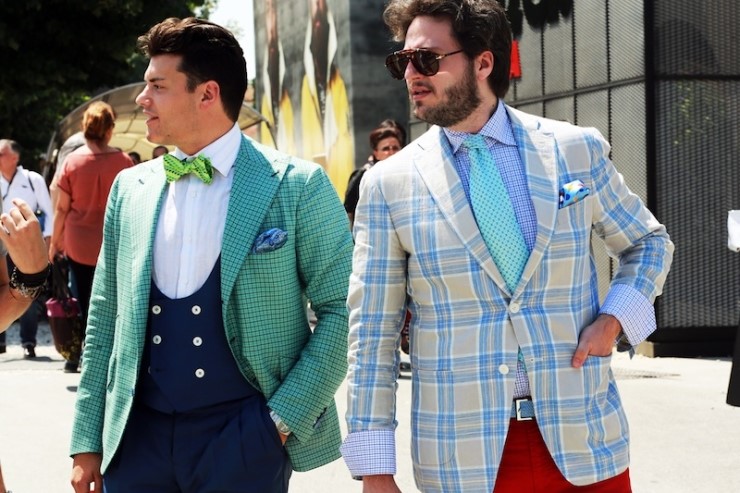 Unexpected mismatching continues to trend. Litmus test of whether the combinations work: If people stare at your clothes and are unable to speak, it probably doesn’t work.

With more accessories than Grandma wore on Sunday morning…bracelets, lapel pins, tie bars/pins, cuff links, collar pins, hats, watches and rings abound. But at some point we ask ourselves if the phrase “less is more” has some relevancy.

A trend so strong that putting socks on in summertime is almost embarrassing. Silver lining: the sock industry has responded with innovations to tempt even the most staunch sock-less man to return (at least occasionally) to wearing socks in summer.

Sure, it can be carried a bit far but we don’t dislike the (err…) ballsiness of the practice of being free with your tie blade, especially if everything else on the suit ensemble is kept relatively simple. The pocket square craze is a great wonder for those who know how to draw the line between having fun and being a lounge lizard. It’s easy to like the look of two squares instead of one, when the number of accessories are kept to a minimum and the squares go well together.

Sometimes things look good loosened up, like the unbuttoned shirt collar. But when the cuff buttons on the jacket and the buckles on the shoes are left undone, it seems unnecessary to announce that your coat-sleeve buttons “work” and so do your shoe buckles.

Wearing shorts during the summer months makes sense, but it’s difficult to stop yourself from imagining that this is what these men look like in boxers. Possibly the newest blockbuster trend of the ten…will it stay or will it go?

When Parisian Gentleman began as a humble blog five years ago, we had no idea that it would evolve into an online magazine format with eight contributing editors and hundreds of thousands of readers each month. Today, we share success with several other menswear-themed websites and forums and have the benefit of media superstars like Tumblr, Pinterest, and Imgur for a plethora of photography inspiration.